Oxbotica, the award-winning Oxford-based Artificial Intelligence company bringing driverless cars to the streets of the UK, announces today (24th April 2017) that it is leading a consortium of companies that will help to further cement the UK’s reputation as a world leader in the development of autonomous vehicles.

The DRIVEN consortium – which benefits from a £8.6 million grant awarded by Innovate UK – is an ambitious project that will see a fleet of fully autonomous vehicles being deployed in urban areas and on motorways, culminating in an end-to-end journey from London to Oxford. These vehicles will be operating at Level 4 autonomy – meaning they have the capability of performing all safety-critical driving functions and monitoring roadway conditions for an entire trip, with zero-passenger occupancy. No connected and autonomous vehicle trial at this level of complexity and integration has ever been attempted anywhere in the world.

The consortium’s 30-month project plan, which is due to commence in April 2017, will shake-up both the transportation and insurance industries by seeking to remove fundamental barriers to real-world commercial deployment of autonomous vehicles. Key challenges the consortium will address include: communication and data sharing between connected vehicles; Connected and Autonomous Vehicles insurance modelling: risk profiling and the new cybersecurity challenges that this amount of data sharing will bring.

A major part of the consortium’s work will include the use of a fleet of six inter-communicating vehicles equipped with Selenium, Oxbotica’s cutting-edge vehicle manufacturer (OEM) agnostic software. As a platform, Selenium provides any vehicle it is applied to with an awareness of where it is, what surrounds it and, with that knowledge in hand, how it should move to complete a task.

A key challenge will be how to insure autonomous fleets of vehicles – and the consortium plans to develop a system that automatically takes into account data from the vehicle and external sources that surround it, for example, traffic control systems. The project will radically transform how insurance and autonomous vehicles will work together in connected cities.

The project will also address data protection and cyber-security concerns raised by international policymakers and law enforcement agencies around the world by defining common security and privacy policies related to connected and autonomous vehicles.

Commenting on DRIVEN’s launch, Dr Graeme Smith, Chief Executive of Oxbotica, said: “Today’s news is truly ground-breaking. No company, group or consortium of autonomy experts has ever attempted what DRIVEN is planning over the next 30-months. We are seeking to address some of the most fundamental challenges preventing the future commercial deployment of fully autonomous vehicles. I have full confidence in DRIVEN’s world-leading and internationally respected team of specialists to deliver this project.”

Professor Paul Newman, Head of the Oxford Robotics Institute based at the University of Oxford, and one of Oxbotica’s founders, said: “DRIVEN is the first of its kind and brings a host of new questions surrounding the way these vehicles will communicate with each other. We’re moving from the singleton autonomous vehicle, to fleets of autonomous vehicles – and what’s interesting to us at the Oxford Robotics Institute is what data the vehicles share with one another, when, and why.”

Richard Jinks, who leads the project at XL Catlin, said: “Working on this project gives us the opportunity to work with leading external parties to create a risk profiling tool and insurance pricing mechanism which is truly revolutionary.” 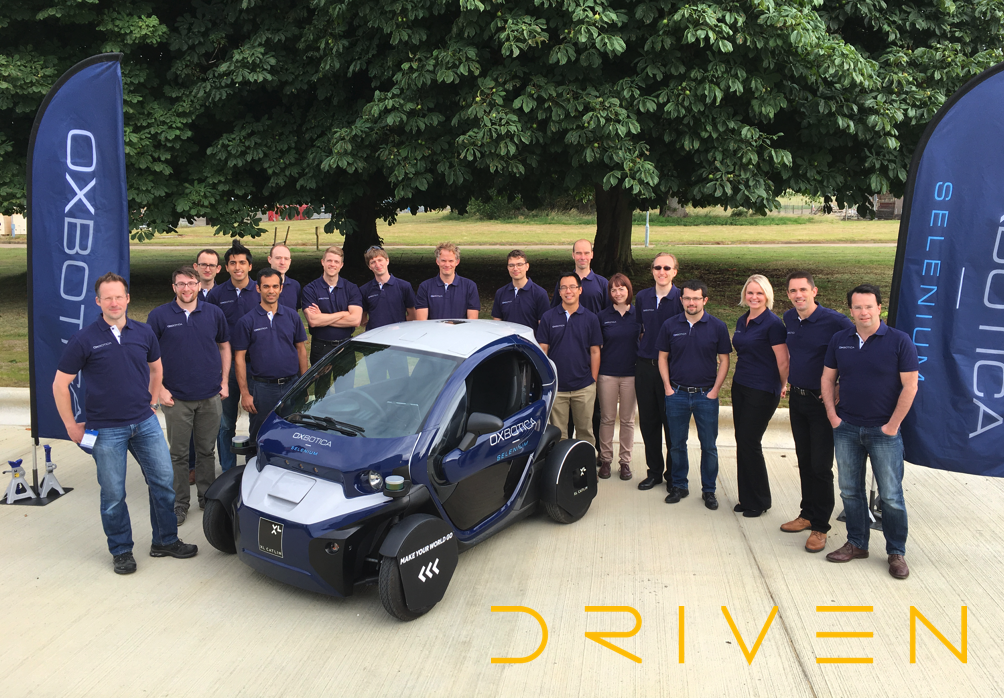